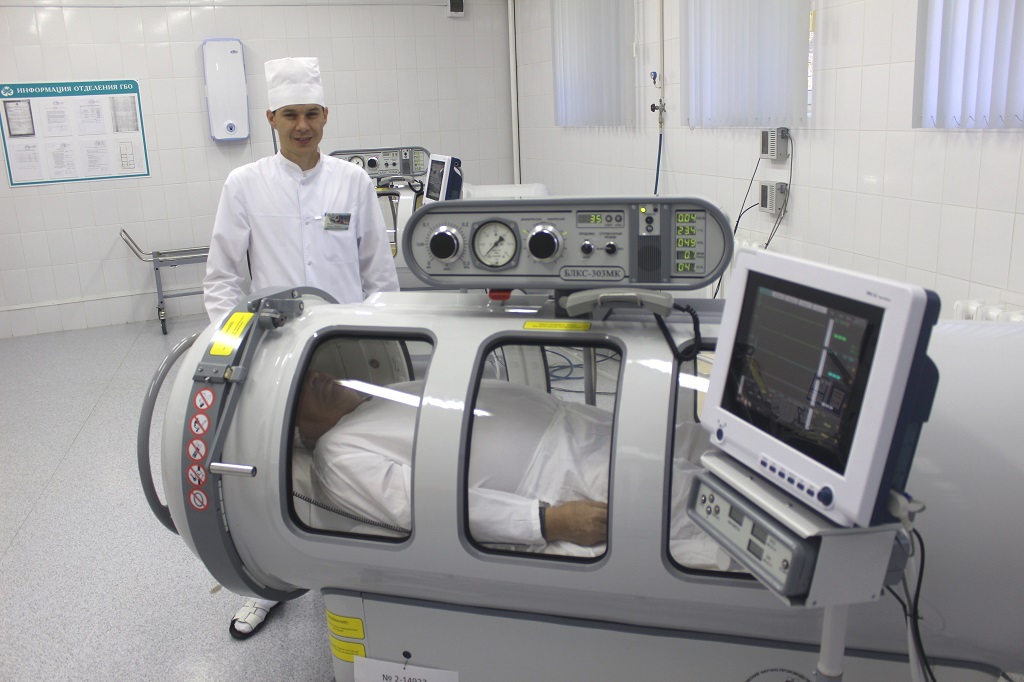 The sanatorium "Krasivo" carries out a complex of therapeutic measures aimed at the treatment of post-kidney syndrome, stimulating immunity and providing anti-stress effects.

To restore and normalize the work of the respiratory organs, the sanatorium program includes visits to a salt cave (speleotherapy), a course of inhalations, heat treatment, oxygen therapy in pressure chambers, ozone therapy, a special course of massage and physical therapy.

During speleotherapy, the anti-inflammatory and mucolytic effects of salt aerosols restore the organs of the bronchopulmonary system, reduce tissue edema and improve the patency of the respiratory tract.

Also, in the sanatorium, vacationers are offered a course of inhalations with medicinal herbs containing essential oils or with medications that are prescribed individually, taking into account concomitant diseases and the presence of contraindications.

Oxygen therapy in modern medical installations-pressure chambers for hyperbaric oxygenation-helps to eliminate oxygen starvation and normalize the work of internal organs after a viral infection, which leads to a violation of the oxygen regime of the body.

Many years of experience in the use of ozone therapy has been acquired in our sanatorium. Intravenous administration of ozonated saline solution is used as an anti-inflammatory, disinfecting, healing and immunomodulatory agent.

For a complex therapeutic effect by warming up and stimulating local immunity, patients are prescribed mud applications on the chest and neck area. Also, traditional balneotherapy includes foam-licorice, turpentine coniferous baths, which have an expectorant, immunostimulating and soothing effect. To provide a tonic effect, a variety of therapeutic showers are used: a Charcot jet shower, as well as a more relaxing circular shower and a Vichy shower. Among the hardware methods, laser therapy and general magnetic therapy are widely used, which improve the work of the anticoagulation system of the blood, stimulate blood circulation, activate metabolic and regenerative processes.

The medical complex includes a special respiratory gymnastics, which allows not only to improve the function of external respiration, but also to have a restorative effect on all body systems, because proper breathing is one of the principles of good health.

General massage has a positive effect on the nervous, cardiovascular, respiratory and immune systems, relaxes and restores the body's strength. One of the most important effects of chest massage is its powerful cleansing and relaxing effect – it facilitates the evacuation of sputum from the respiratory tract, relieves inflammation and soothes cough.

The air of the pine forest is especially useful for people who have suffered from viral respiratory diseases. This air contains more than two hundred biologically active volatile substances. The air of the coniferous forest has powerful healing properties, thanks to the active release of phytoncides by coniferous trees, which disinfect the air and create a unique microclimate.

A very important stage, in addition to restoring the usual way of life after a long period of self-isolation, is to achieve inner harmony. Psychologists help to overcome fears, to survive anxiety and excitement at group and individual psychotherapy sessions. The main goal of such therapy is to teach the patient to control his physical condition, preventing the development of depression, shortness of breath or other similar reactions.

The objective advantage of treatment in the sanatorium is the possibility of receiving several procedures per day: mud treatment, therapeutic baths, herbal inhalations and massage.